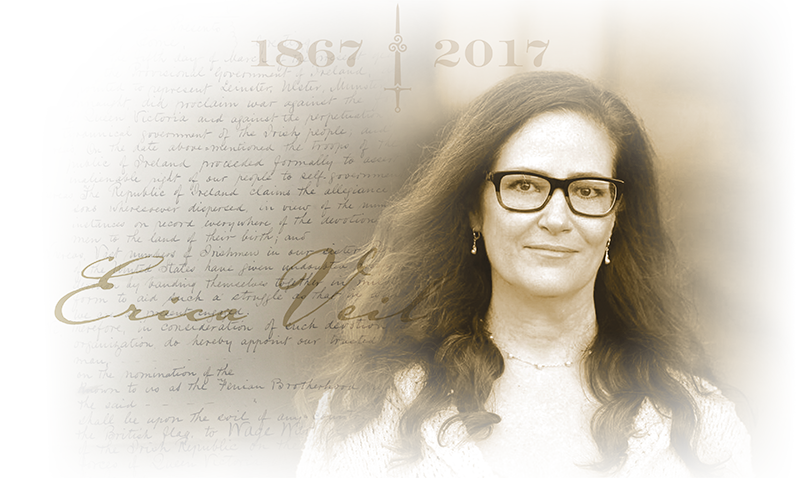 In January 2016, I returned home to Troy, New York after seven-and-a-half months of overseas research with plenty of fodder for a full biography of my great-great-grandfather, Colonel Thomas J. Kelly — he was one of The Bold Fenian Men. In January 2015, I envisioned this project taking a few weeks of research, to obtain records on missing bits of the story, and then straight to writing. In a year, it has mushroomed to what may be an open-ended project.

From January to November 2015, I immersed myself in the collections of national, state, municipal, and Web archives, private and public libraries, museums, and organizations in six countries. Amassed was approximately sixty-eight gigabytes of scanned image data: downloaded documents and photographed pages of handwritten reports. All this to finally write the authoritative biography of my great-great-grandfather, Colonel Thomas J. Kelly — a year quite different from A Year In Provence.

To write this biography is a project that had been on my list since 1994 after my mother’s eldest brother, John Alfred Quist, first taught me about my ancestor. I was living in Miami at the time. I immediately started scouring the indices of Irish-interest books in every library and bookstore in the area, looking for his name. Those were my salad days. Instead of buying books I would make copies of pages that told me more of his story. Knowing what I know now, what I read then barely touched on the enormous impact his life’s passion and devotion to Ireland had on his children and successive generations. A few of my cousins, also direct descendants, were not aware until last year they have Irish blood running through them. No one yet has written a thorough story of this man and his entire life.

I jumped in, that’s what I do. As a certified project manager, I felt very comfortable plunging into this project with little to no experience at this level of research or biographical writing. As the year progressed, it became painfully clear I had started with too many assumptions and naïveté. There were also plenty of surprises.

I have discovered that this man and the movement he led physically touched the history of nearly every continent and nation in this world. It is arguably the first struggle for freedom of a nation that impacted and was supported by diaspora that had been forced to emigrate in the quest for a better life.

In the American archives and libraries, I concentrated my efforts on the Colonel’s American life, assuming that Dublin would have much more about the early Irish Republican Brotherhood activities that made the 1916 Rising possible. I also expected someone in Ireland to be eager to view the American records I brought with me. Would anyone I spoke to in Ireland know the name Colonel Thomas J. Kelly and the story of the Manchester Martyrs? Would University College Dublin Archives have any collections dating to pre-1916?

While based in Dublin for the summer months, I took time to spend a few days in Manchester in July. I met proud and knowledgeable individuals whose ancestors were members of the Irish diaspora, including a man who was in Ireland during The Troubles, a Catholic priest who I convinced to teach me a French curse phrase, and a very elderly lady who was related to one of the Manchester Martyrs. A highlight was interviewing Joseph O’Neill, author of 2013 book The Manchester Martyrs, in his home while his lovely wife, Dolly, played bartender and my photojournalist friend, Graham Harrison, was videographer. We toured the World Heritage Centre, gorgeously constructed from all-Irish-sourced materials. I was interviewed by Martin Logan, reporter for IrishTV.com. I also met with the curator of the Manchester Police Museum and Archive who gave me access to documents collected on the events of 1867.

As the three months in Dublin were coming to an end, I knew I had to get back to Manchester and London, where I believed there were still extensive records yet to be discovered. In an attempt to plan my visit well, such as how long and where to stay in each city, many telephone calls were placed to England to determine where 1860’s records were located and how much there was to be had. I naively assumed that when every person replied something along the lines of “Sorry, records that old wouldn’t have been kept this long,” that there was a measure of truth in what they were saying. We had to be in Paris for a week-long conference the third week of September, so starting on the first of the month was a nine-day stay in Manchester and a nine-day stay in London. The majority of our time was spent in the Manchester Central Library and the National Archives. However, it was fun to discover that Chetham’s Library, the oldest public library in the English speaking world, had an item in its collection directly related to my research.

Half a day was also spent back at the Manchester Police Museum and Archive, where I was permitted to use their scanner connected to my laptop to properly capture the content of two boxes of material. As I was reviewing their library holdings, the most amazing coincidence happened. The lady in the groundfloor shop came up with a somewhat perplexed countenance, saying an elderly woman claiming to be a collateral descendent of Sergeant Charles Brett was downstairs and wished to view documents. She looked at me intently, wordlessly wondering if inviting her up to the archive while I was working in there would be acceptable. My immediate reaction was that of course it was okay. In fact, how could it not be.

Revelations included finding Sergeant Charles Brett’s grave demolished by late night drug- and drink-addled antics. No one I spoke to, except this woman who is an un-verified collateral descendent of Brett, seemed to think it was important enough to have security cameras installed in a cemetery for public servants, or even repair the grave of the first English policeman-detective to be inadvertently killed while faithfully doing his duty. Maintenance and upkeep is left entirely to family, of which there are no known direct descendants of Brett.

I also gleaned that one panel of the van in which Colonel Kelly and Captain Deasy were being transported on that fateful day of September 19, 1867, may be located in South Africa. A British policeman and collector may have brought it there when relocating upon retirement.

Irish diaspora in Manchester enlightened me to the fact that people there view Sergeant Brett as the only martyr in the whole affair and the Manchester Martyrs as victims of English injustice.

Another interesting twist is that Joseph O’Neill’s 2013 book The Manchester Martyrs, was originally written as an historical novel, which was rejected by the publisher in favor of the non-fiction form.

A thought-provoking realization was that Web key word search results vary drastically between countries. Knowing how I felt discovering photos of strangers posing with Colonel Kelly’s brand new headstone in 2008, part of my work included finding all living direct descendants, including those from the Colonel’s second daughter, who married a French nobleman. From American servers, I found a small lead informing how many children his daughter had. Not much new surfaced while searching from Irish or English servers. In France, I was able to identify all descendants, but details of living individuals were hidden. From Belgian and Dutch servers, everything opened up and now I have all names, dates, and relationships for that branch of descendants.

One aspect of my research showed a pattern that was a rude awakening, which I noticed very early on in my many hours in the New York Public Library. The brunt of the writings were published in the first one hundred years since 1867. Beyond the 100-year anniversary of the Manchester Martyrs, the quantity of published works on the early Fenian movement dropped considerably. By 1987, there was not an insignificant smattering of works on the topic. But from 2006, Colonel Kelly received a slight mention at best, and was overwhelmingly ignored for the most part, as if he had not had a significant role in re-shaping and leading the movement after James Stephens was deposed. To assuage my sensibilities as a descendent, I became determined to firmly establish my greatgreat- grandfather’s place in history. The impact his devotion to the cause had on his descendants is not insignificant, especially apparent after meeting cousins who descend from the Colonel’s eldest brother, Patrick Kelly.

With the 150th anniversary of the Manchester Martyrs and associated commemorations and memorials in 2017, I have ceded to being realistic and admit there is more than enough material to start a thorough first attempt at a biography. Much of the primary source documents are hand written in old-fashioned cursive script. In the last year I have become very experienced at reading the old way of writing and deciphering the difficult bit through cross-referencing with other reports and letters on similar topics. I am presently looking into adopting sophisticated technology to assist this project. The sheer quantity of documents that have never been digitized, let alone transcribed, is quite overwhelming for just one person. Enlisting volunteers is a logical next step, as well.

As a parting thought for this piece, many friends and family have been under the impression this has all been a positive experience because on social media and in correspondence I determined to stay positive with my messages. In reality, it was very difficult most of the time. Technology failed starting before we even left the States, and continued the entire time and to the present. We took very little vacation time, and I worked some days without sleep because there was so much to do, or I had just met someone so interesting, or found an extremely revelatory document, that I just could not sleep. On one long weekend in late August, we finally hired a car and took a road trip through Connemara, where I unfortunately sustained a compression back injury from a harsh dip in the road, which still haunts and limits me today. When friends ask me “how was it?”, I reply, “It was amazing, difficult, painful, long, lovely, and a life-altering experience.”